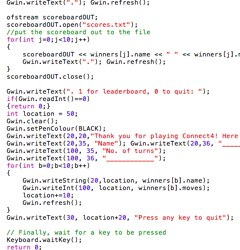 For University, one module I took in the first year involved learning C++ (and an in-house graphical library called Gwin – No longer available online). After two tests which determined progress and proficiency in the language, we started our coursework. The task was very open-ended and we had lots of freedom. We were only really asked to use C++, Gwin, and a number of constructs of the language.

I decided to make a Connect 4 game. It would be pass and play, players would type numbers to select columns to drop their coins into. A more detailed specification and other details can be found on the report we were asked to produce.

When the coursework had been marked I received 58% which is at lower second class level. I’m satisfied with this as I realise I could have added a lot more functionality if I put more time into the project.

Download Connect 4 here. It will only run on Windows and is only guaranteed to work on Windows XP. We were not expected to thoroughly test on different operating systems and hardware configurations.

For changes I have made since completing the module, check out the Connect4 repo on GitHub, or download the current version.