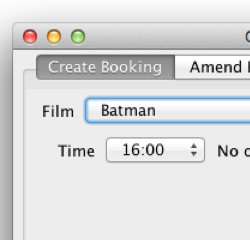 Another University project that I want to talk about is a client/server cinema booking system written in Java. I worked with my good friend Nathan on this as it could be completed in pairs. We used GitHub (obviously) to host the project and the repo can be found under Task2.
We achieved a mark of 90% for this as we implemented all of the requirements to a good standard. We also had a report to produce, explaining design choices, etc. It’s not interesting, but the report’s here if you want it.
The main points that I’d like to discuss about this project are:

I loved this project and learnt a lot about software development, Java, and the client server model.