Read more About Me 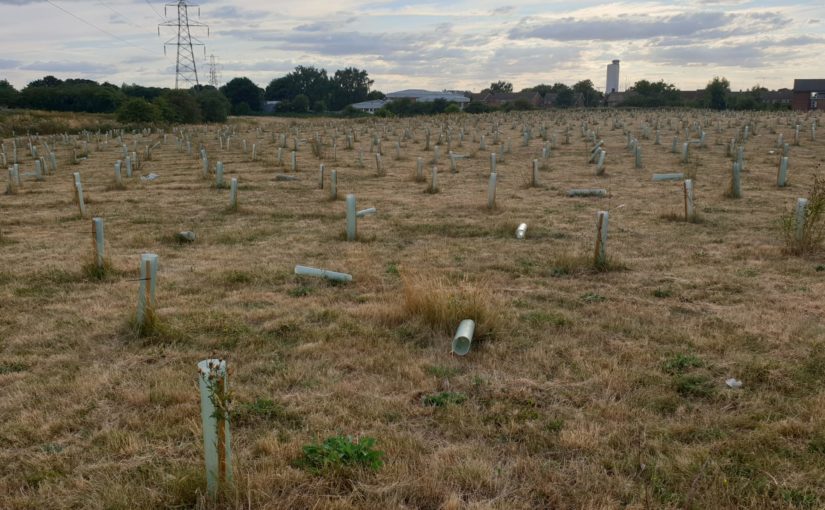 A report shows that 90% of trees planted by West Norfolk Borough Council in their flagship LynnSport carbon offsetting scheme have died since being planted in April this year.

Dr Charlie Gardner, senior conservation lecturer, and Louise Gardner, RHS qualified Horticulturist, have written a report this week which investigates the status of the trees planted at LynnSport. After declaring a climate emergency in September last year, this scheme to plant 6000 trees in the LynnSport area has been a key part of the council’s approach to offsetting their corporate greenhouse gas emissions. Planted in April this year, the status of these whips has since been a topic of confusingly hot debate.

Cllr Michael de Whalley visited the site a few weeks after their planting and suggested that some 75% of the trees were dead. When a member of the public questioned this in a council meeting, she was assured by environment portfolio holder Cllr Kunes that both he and the council’s tree officer had been to the site and the “majority” were alive.

Unconvinced by the report from the council arboricultural officer, Dr and Mrs Gardner visited the site and assessed the status and condition of the plantation. Their method sampled 15 sections of the site and assessed 10 trees in each section. This representative sampling method provides an accurate picture of the whole 6000 whips without needing to inspect each one*. After looking at 150 trees they found that only a mere 15 of their sample were alive. Of the 15 alive, the report explains they are in a poor state of health which provides “no guarantee of their continued survival.”

Recently we have faced record-breaking heat and dry weather which left many plants struggling, but the authors of this report “believe that most of the dead whips were probably already dead before the record heat of 18-19 July 2022.” This lines up with Cllr de Whalley’s finding made in May, well before the heatwave.

The report highlights the poor planting practices as the main reason for the low survival rate in this scheme. Approximately one in six of the whips were not properly planted, where the soil was not tamped down, trees were not planted deep enough to cover the roots, and some were not placed in the soil at all – simply resting inside the tree guards instead. With such a prevalence of improper planting, the shocking survival rate seems less surprising. The tree officer’s report to the environment cabinet member suggested the trees have “been through a bit of a shock” by being transplanted to LynnSport, but made no mention of the quality of their implantation.

Cllr de Whalley had suggested that some whips had been vandalised, this wasn’t raised by Cllr Kunes or the tree officer, and this report claims to have “found little evidence of vandalism”. The council have installed CCTV in the area to “deter antisocial behaviour”, how effective this would be is not clear.

A council spokesperson responded to LDRS coverage of this issue by saying that the sample size used was small and hinted that the recent record-breaking heatwave may have affected the survival rates. The spokesperson also blamed alleged vandalism and how the trees are in a “dormant” phase since planting. As detailed above, many of these factors were addressed in the report itself. The council should face reality and accept that this scheme has failed to deliver.

In 2020, the council came under fire when 500 trees, planted by the local “Churches Together” group, were all found dead after the council had promised to take on the management of the plantation. The council later replanted 400 trees on this Fairstead site and has since replanted another 500 on this site again this year.

You can read the full report here.

* I’m no statistician, but I know that you can randomly sample to get a good idea of the full population. I think that the sampling used here gives a 5% margin of error – so we can be confident that between 85% and 95% are dead. I’m happy to be corrected on this.